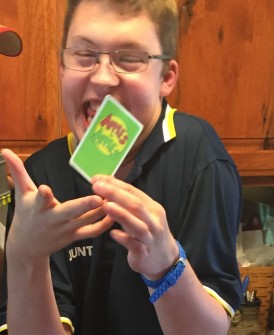 “Hey, Mom, remember that time you fell & grabbed that guy’s butt to break your fall?!” my son said to me.  Ummm, yes.  Every second of every day.  It didn’t help that the guy was wearing American flag pajama pants.  I practically see those pants in my sleep.  I’ve said it before, I have trouble letting go of some thoughts.  Also, I fall a lot.  So add my lack of grace to my over-thinking of things … yes, I remember.

Evan thinks about things a lot.  He loves certain things like his bags, Apples to Apples cards and now plastic cups.  He thinks about them all of the time.  Even in the middle of the night he will call out asking where is his baseball bag.  Or lately I can hear him knocking cups together like he’s just checking that they are still there.  After a knock or two he’s okay and he goes back to sleep.  He doesn’t leave the house without a favorite bag full of his favorite cards and favorite cups.  Leaving the house is one of the most difficult, lengthy processes.  Getting him to focus on just one bag and not every single one of his cards and cups can be overwhelming.  If you wonder why we are always late, this is usually it.  It has become a habit for us to get ‘the bag’ before we leave.  Evan doesn’t often let us forget it but we have learned the hard way to think one step ahead.  Bring the bag now or go back and get the bag later.
I get after Evan sometimes about his obsessions.  I want him to stop obsessing so much and just once be able to forget about the bag, the cards, the cups.  What will he start thinking about next?  What will be the next obsession?  It can be so overwhelming to have to add these things to the day to day routine.  Life would be so much easier if I didn’t have to remember to bring the bag full of stuff and could just leave it behind.  It’s heavy.  Really heavy.  Sometimes everything spills out.  Sometimes it happens in private and sometimes it’s in public.  Sometimes people look at us like we are crazy for carrying these cumbersome and useless things around. But try explaining that to Evan.
So I started thinking about Evan’s obsessions and realized they aren’t so different from my obsessions.  My obsessions are just more socially acceptable.  I am better at hiding my obsessions.  But like Evan I keep adding to my obsessions.  There is always the next thing I’m thinking about, worrying about.  It’s heavy.  Sometimes my worries and obsessions spill out.  Sometimes in private.  Sometimes in public.  Sometimes others look at me like I’m crazy for carrying these worries on my heart.  But try explaining that to me when I’m in the middle of it all.  Life would be so much easier if I left my bag full of worries behind.
Jesus tells us in Luke 12 not to worry.  He’s got this.  We don’t need to worry about our life, food, body, or clothes.  He’s got it all covered.  I can stop the worry and remembering already!  Now when Evan needs his bag of goodies I’m trying to remember I am not much different.  I’m carrying my own heavy bag along too.  We both have something we should be leaving in God’s hands.
Bible Verse I’m Loving Today:
Luke 12:25
Who of you by worrying can add a single hour to your life?

View all posts by stefmckeever

What You Are Reading Now: